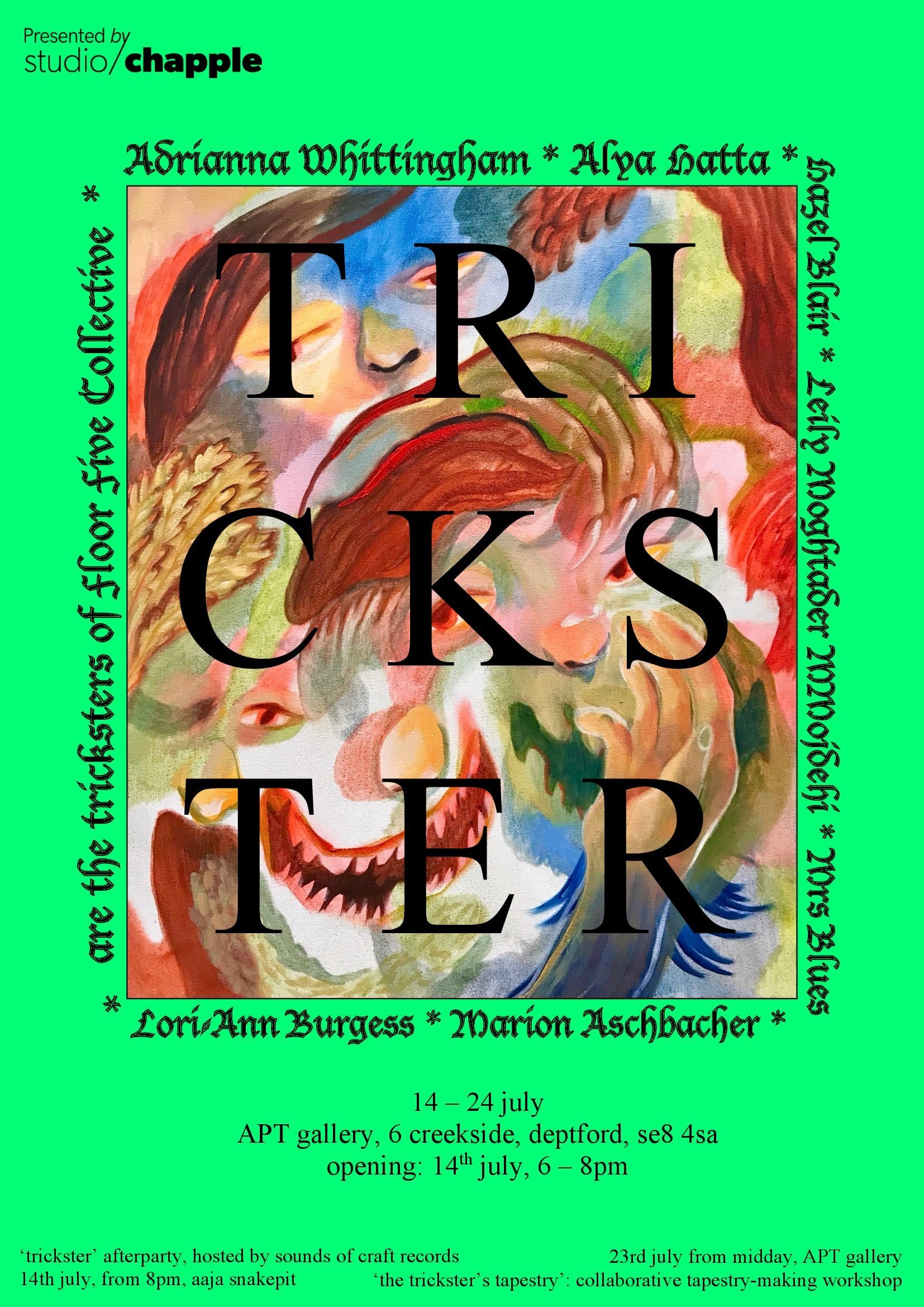 Studio Chapple is delighted to present Trickster, the first exhibition that displays in full the wide-ranging practices of the Floor Five Collective.

Whilst Trickster will highlight the diversity of each member’s particular cultural history and identity, investigating the notion of the ‘trickster’ will allow each artist to playfully explore the common threads and nuances in the non-Western mythologies tied to their transcultural identities.

The trickster is a crucial figure in non-Western folklore and oral mythologies, depicted in different cultures as an animal or humanoid. Shrewd and cunning, the trick-playing character can be regarded as a cultural folk hero who imparts wisdom through proverbial storytelling, but one who also has a dark, sometimes gluttonous side. This supernatural creature can often possess shapeshifting qualities, appearing in various guises while engaging in mischievous activities.

The artists of Floor Five Collective will draw parallels between the shapeshifting qualities of the trickster and the fluidity of their diasporic identities. Furthermore, the idea of playing a trick will be tied to the notion of the artist as imposter – working mischievously with non-Western artistic traditions. 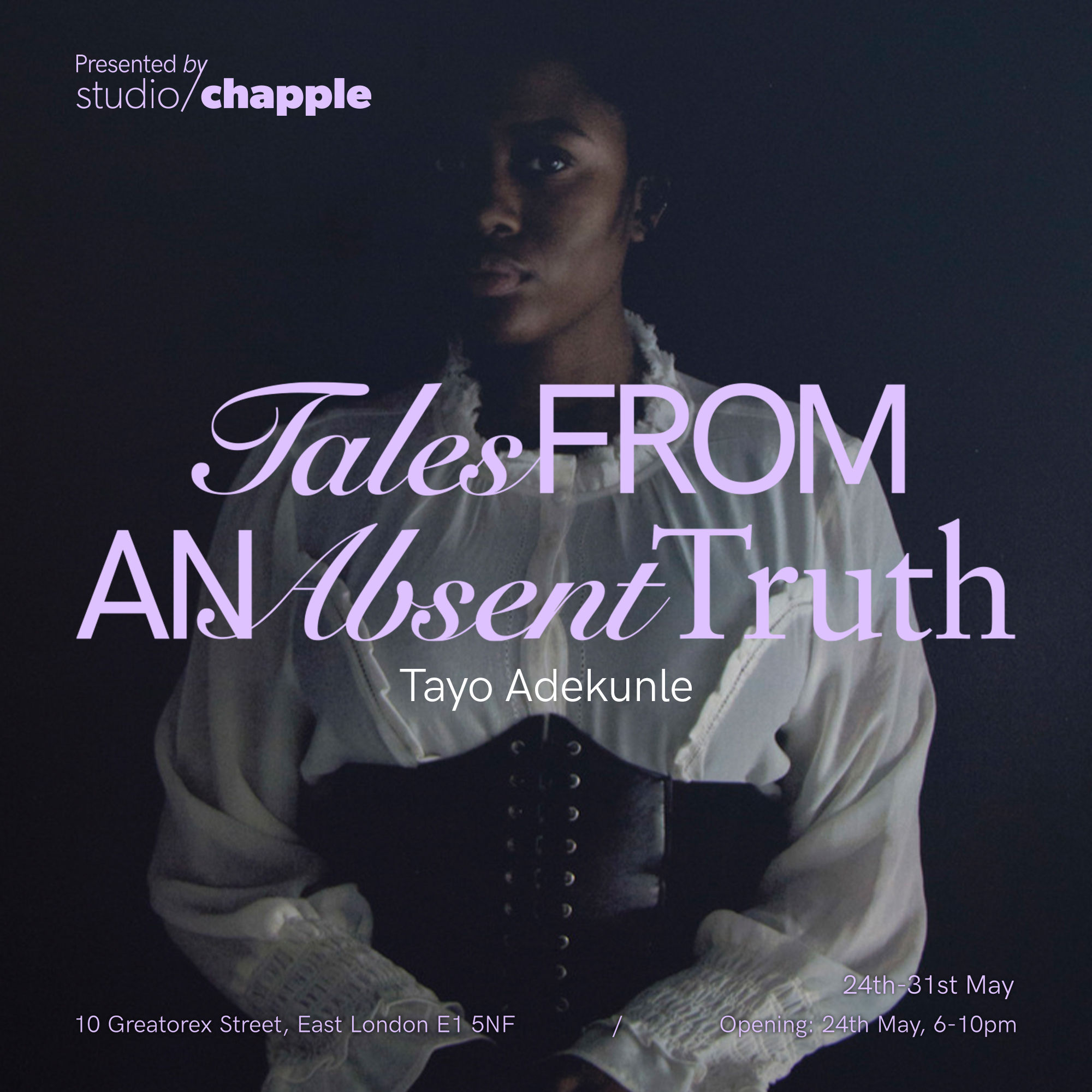 Tales from an Absent Truth

Studio Chapple is delighted to present Tales from an Absent Truth, the first physical solo presentation of works by Nigerian-British photographer Tayo Adekunle. Working predominantly with self-portraiture, Adekunle uses her work to explore issues surrounding race, gender and sexuality as well as racial and colonial history. 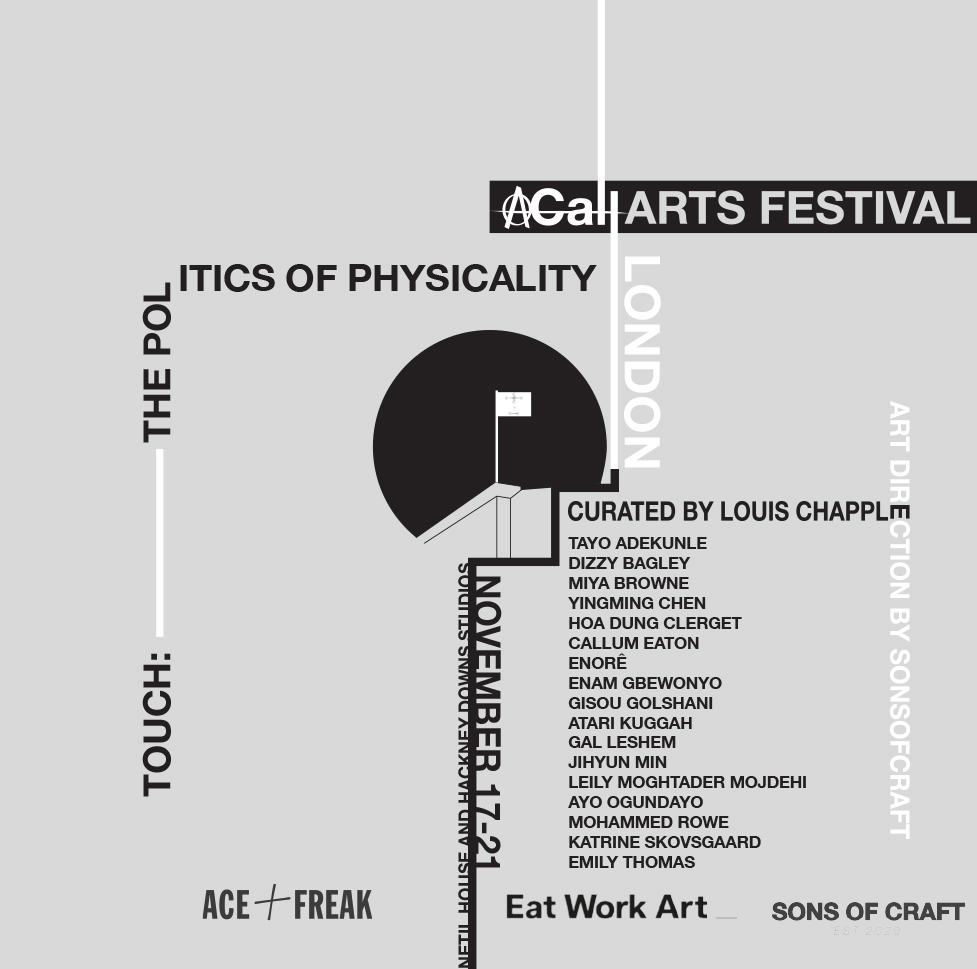 Touch: The Politics of Physicality

Touch: The Politics of Physicality is a double-venue exhibition curated for Sons of Craft’s debut A Call festival, that focused on what we have come to understand as physicality - whether that be through haptic materials, or more abstract concepts. The theme was explored by artists approaching physicality through a nuanced yet diverse range of channels and mediums. In addition to the exhibition, a public programme was organised that included an artist talk, a textile workshop, radio show and curatorial tour.

Around You, Within You or
Nowhere at All

‘Around You, Within You, or Nowhere at All’ is a solo presentation of works by Pippa El-Kadhi Brown. Pippa was awarded the exhibition after winning the Ashurst Emerging Artist Prize 2020. Curated by Studio Chapple founder Louis Chapple and Aya Koudounaris, the four month long show is being hosted by the Ashurst Emerging Artist Prize.
Please do not hesitate to contact me for more information or to book a viewing.